House of Losing Control. A review. 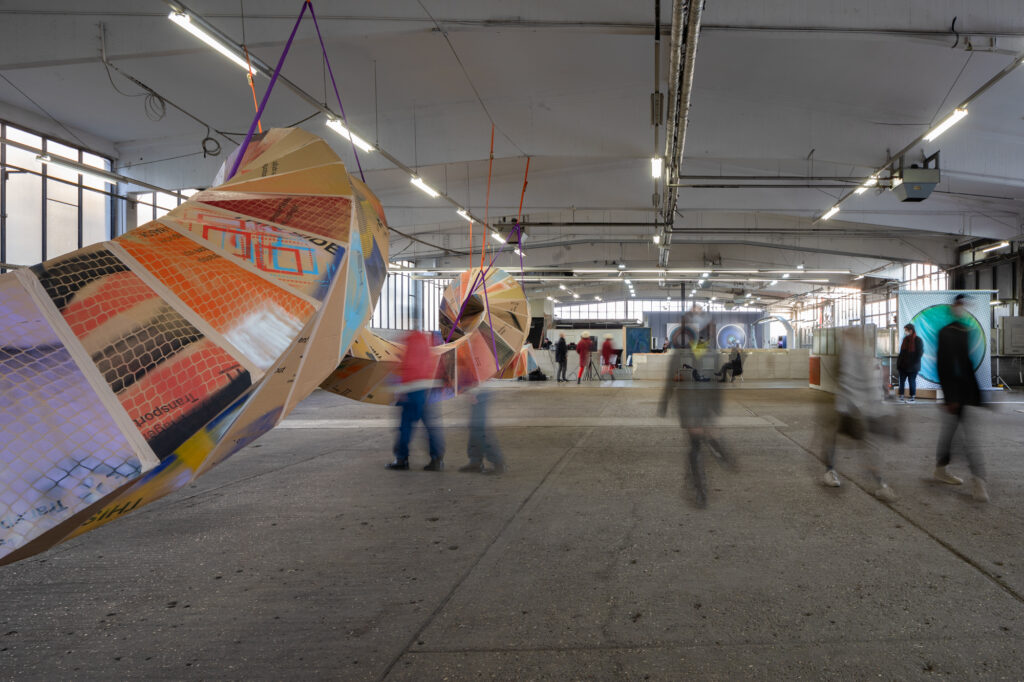 Times of crisis make us nostalgic. One longs for the good old days “before the crisis”. The familiar, well-ordered status quo ante. No imponderables, no having to “drive on the lookout”. Instead: fixed routines, planning certainties, reliable horizons of meaning and expectations, in a word: control. The Corona crisis is no exception. For almost two years we have been waiting hopefully for the day when we can say: We are in control again. We have things under control again. But were we ever in control? Isn’t our belief (delusion?) that we can control things one reason why they have been turning against us more and more menacingly for some time now (and not just since 2020)?

“Losing control” was the motto of this year’s Vienna Art Week. A motto that, in view of the pandemic and climate crisis, offered a lot of room for associations and productive misunderstandings: Was it a demand? A reminder? An admission? A promise even? Of course, we didn’t really know that at first. For us, it was first of all the name of an experiment. Unlike in 2020, we had the opportunity again this year to dedicate our own – physical – exhibition to the theme of Vienna Art Week. Our vision: a House of Losing Control. We were given a site in the 20th district between Nordwestbahnhof and Augarten as an exhibition space, an extensive area with factory halls (formerly Honda Stahl), a car showroom and a dilapidated apartment building, etc., a place that, we were told, would fit our motto perfectly: The apartment building had probably been a “scene of intoxication and loss of control” several times in its history. Besides a (rather dark) club in the basement, it had also once housed a brothel. In short: the place was certainly not easy to play, but it had potential. After three intensive months, the time had come: the musty, demolished building complex had become a model of a multifunctional art venue with exhibition and event spaces, a café, a cultural and neighbourhood meeting place. The exhibition covered a broad spectrum of different artistic positions, including greats such as Cindy Sherman, Bruce Nauman and Santiago Sierra. International as well as local artists were present, some established, others still at the beginning of their careers. The show was embedded in an extensive supporting programme of guided tours, performances and discursive formats.

After three intensive months, the time had come: the musty, demolished building complex had become a model of a multifunctional art venue with exhibition and event spaces, a café, a cultural and neighbourhood meeting place. 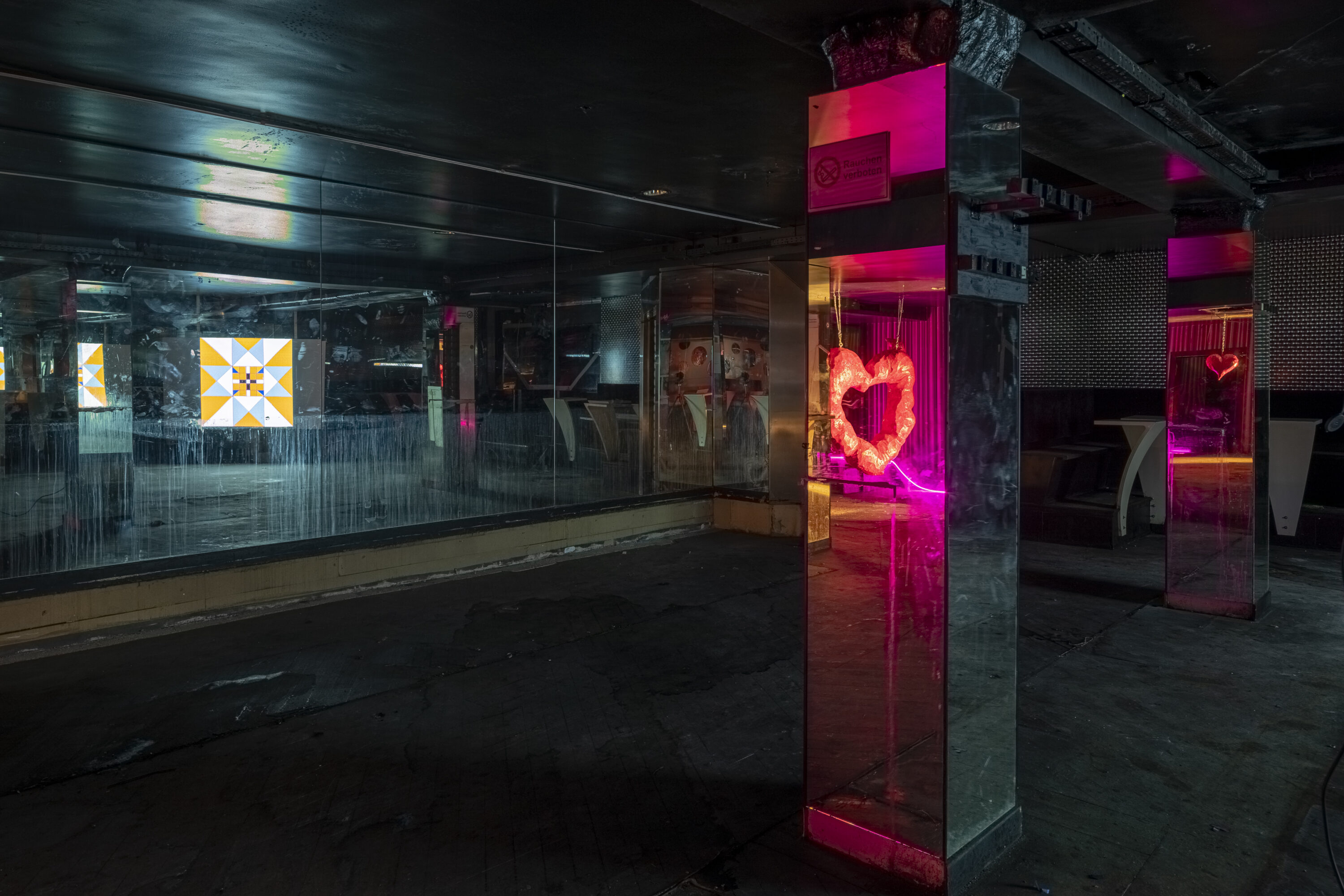 How does one approach such an exhibition in retrospect? How does one retrospectively lead through a House of Losing Control? According to the motto: meandering. For example – as a possible introduction – there is a small photograph by Cindy Sherman, a portrait printed on silk of a goblin-like creature with dead eyes and a wide open mouth. The work was installed somewhat off to the side in a small chamber in one of the factory halls, a set-up that invited one to surrender completely to the pull of this peculiar portrait.

Sherman’s work exemplifies a central thematic strand in the House of Losing Control: loss of control as a cipher for the dissolution of the self. A – one suspects – paradoxical phenomenon: dissolving oneself, transgressing the boundaries of the self, can be a liberation; but it can also (as in Sherman’s case) mean the irrevocable loss of the self, the complete surrender of autonomy and self-control. Not far from Cindy Sherman’s “O.T.”, this ambivalence came to the fore even more clearly in a sculpture by Erwin Wurm from his series “Psycho”. We see the image of a hunched human figure lying backwards on the floor. She is wearing a kind of straitjacket that covers almost her entire body. Whether she is trying to free herself from the textile or, on the contrary, is digging into it with relish, is not clear. We don’t know: Is the sight of this bizarre giant baby touching or simply disturbing? Or both?

It becomes even more diffuse and dangerous when one enters the terrain of lust and sexuality. Eloquent testimony to this – literally – was given at the House of Losing Control by, among others, a video work by the Mexican artist Larissa Escobedo: A pair of moist, glistening lips can be seen in close-up, smacking lustily as they inform us of the sexual preferences and escapades of their owner (the artist?). An encounter as beguiling as it is alienating. A somewhat more whimsical commentary on the entanglements of lust and control was formulated by Xenia Lesniewski and Norman Hildebrandt with their site-specific work “I Got 5 On It” (installed in the former brothel premises in the apartment building), a dildo cabinet that invited us to explore the amazingly rich variety of colours, shapes and sizes of the sex article. 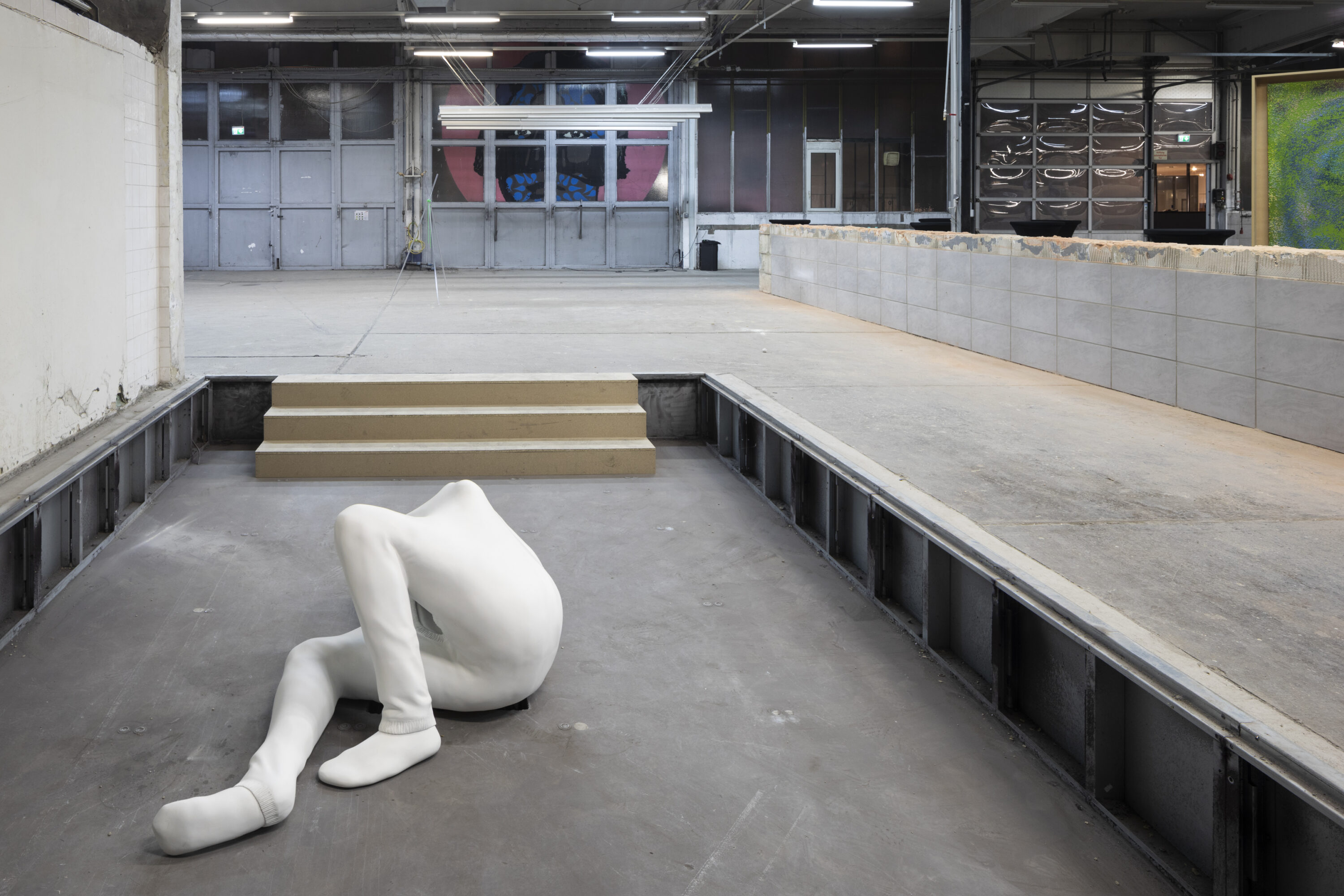 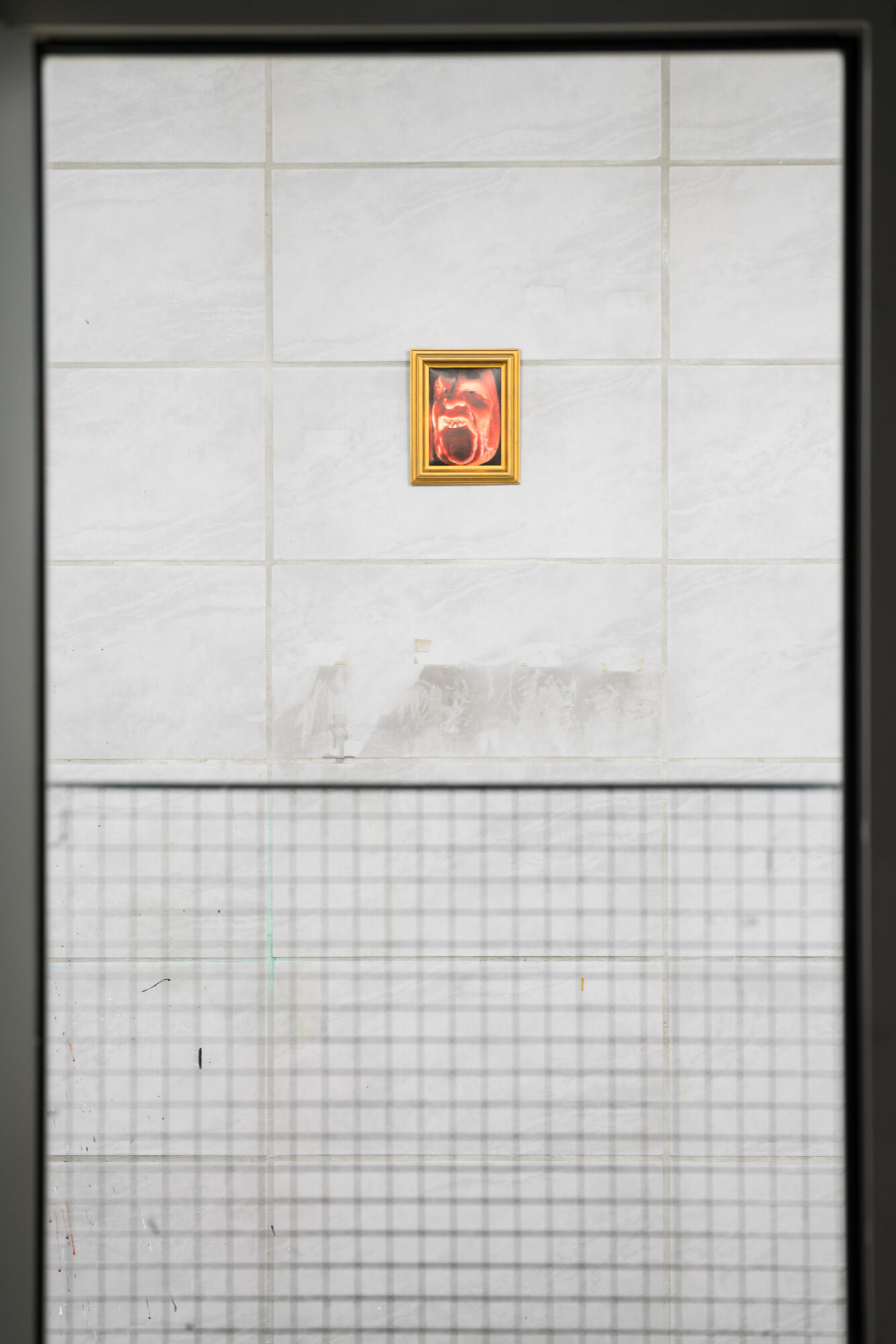 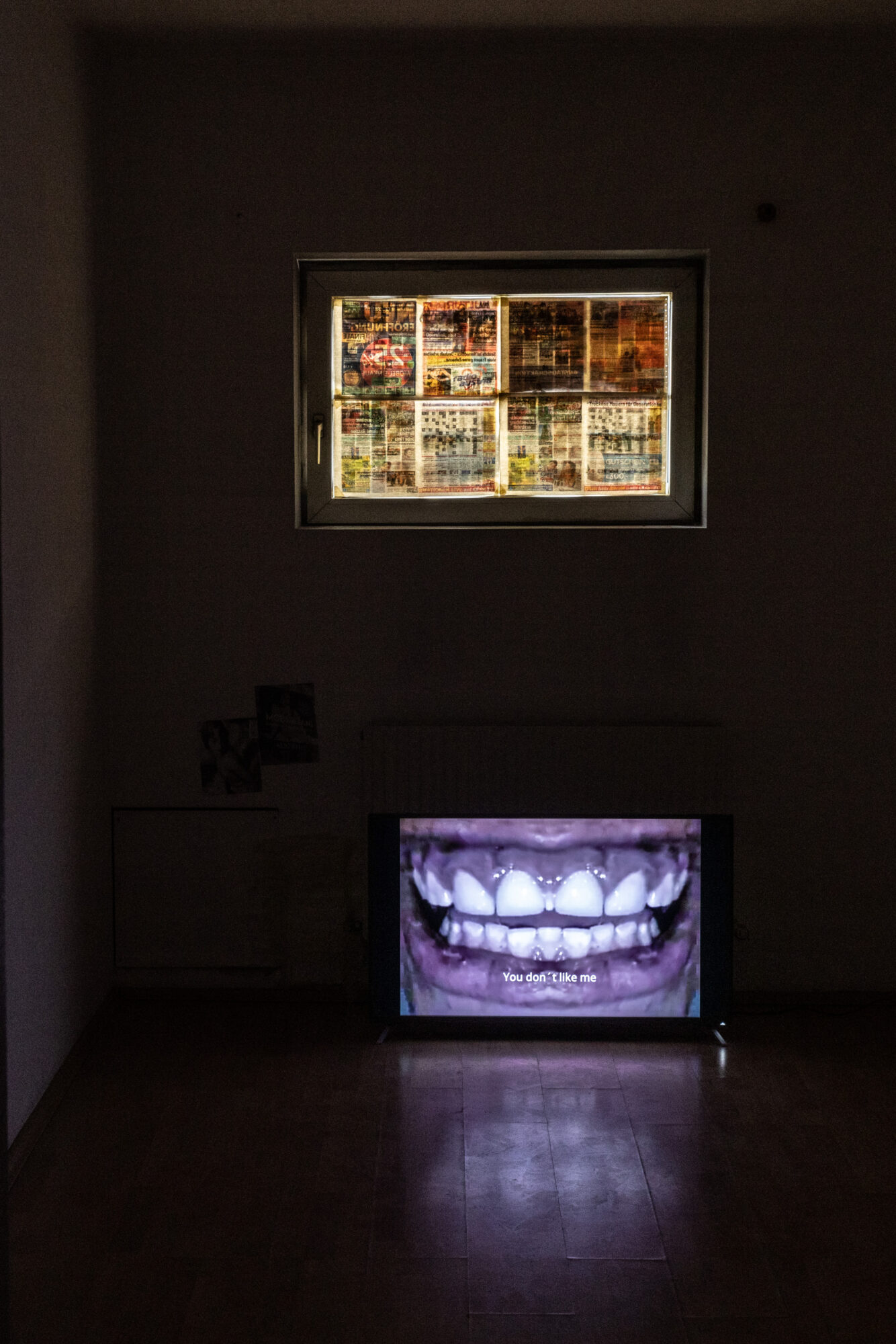 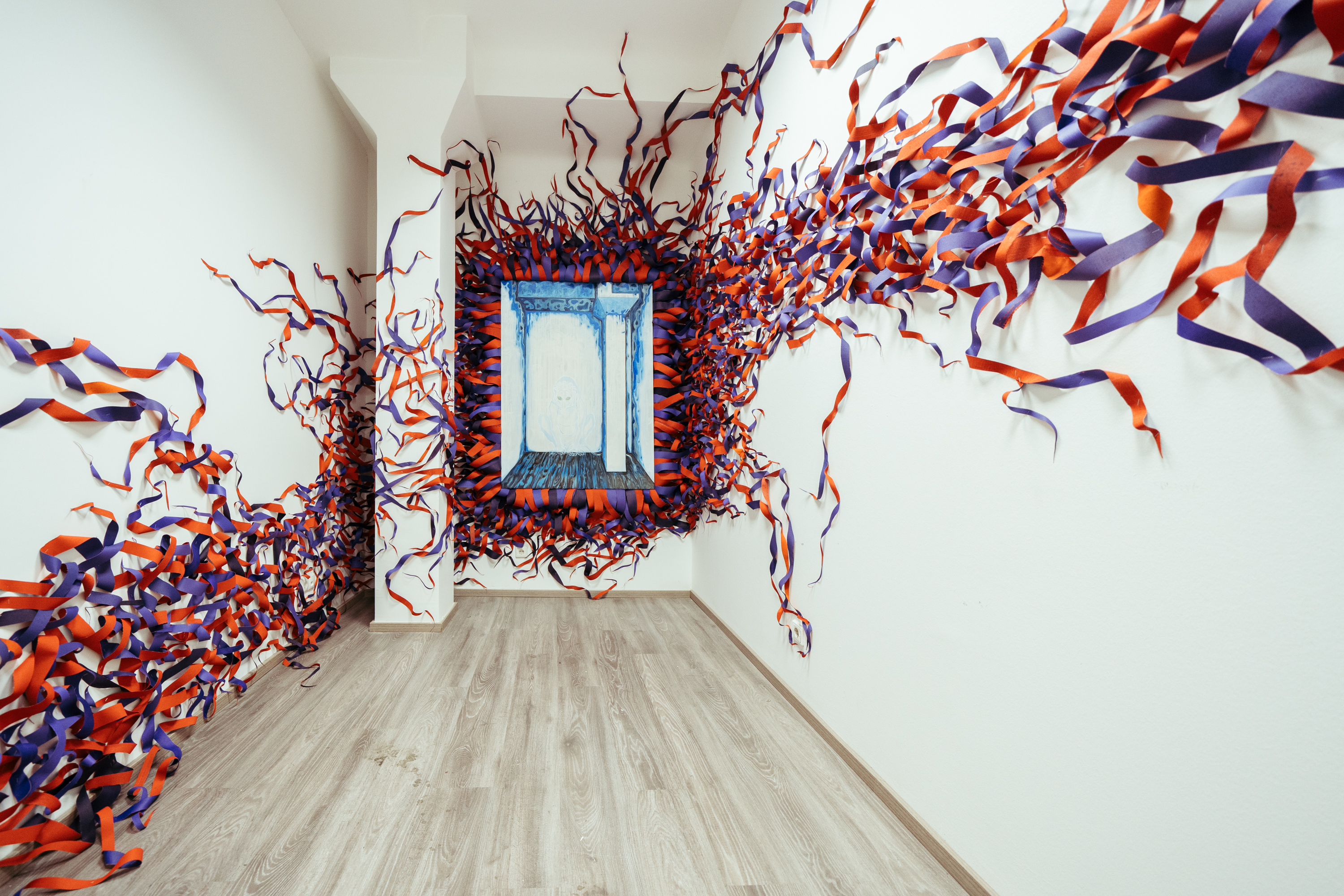 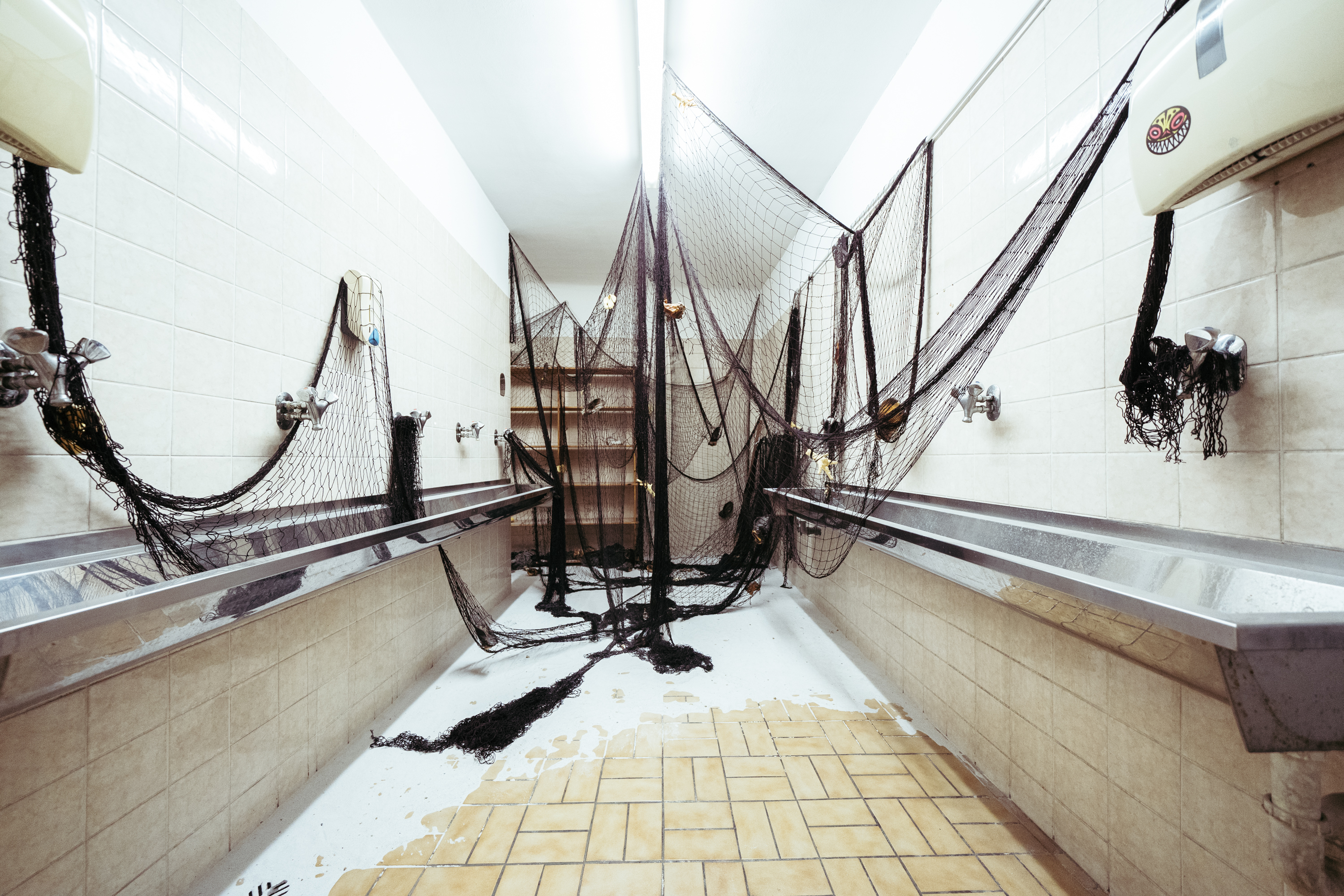 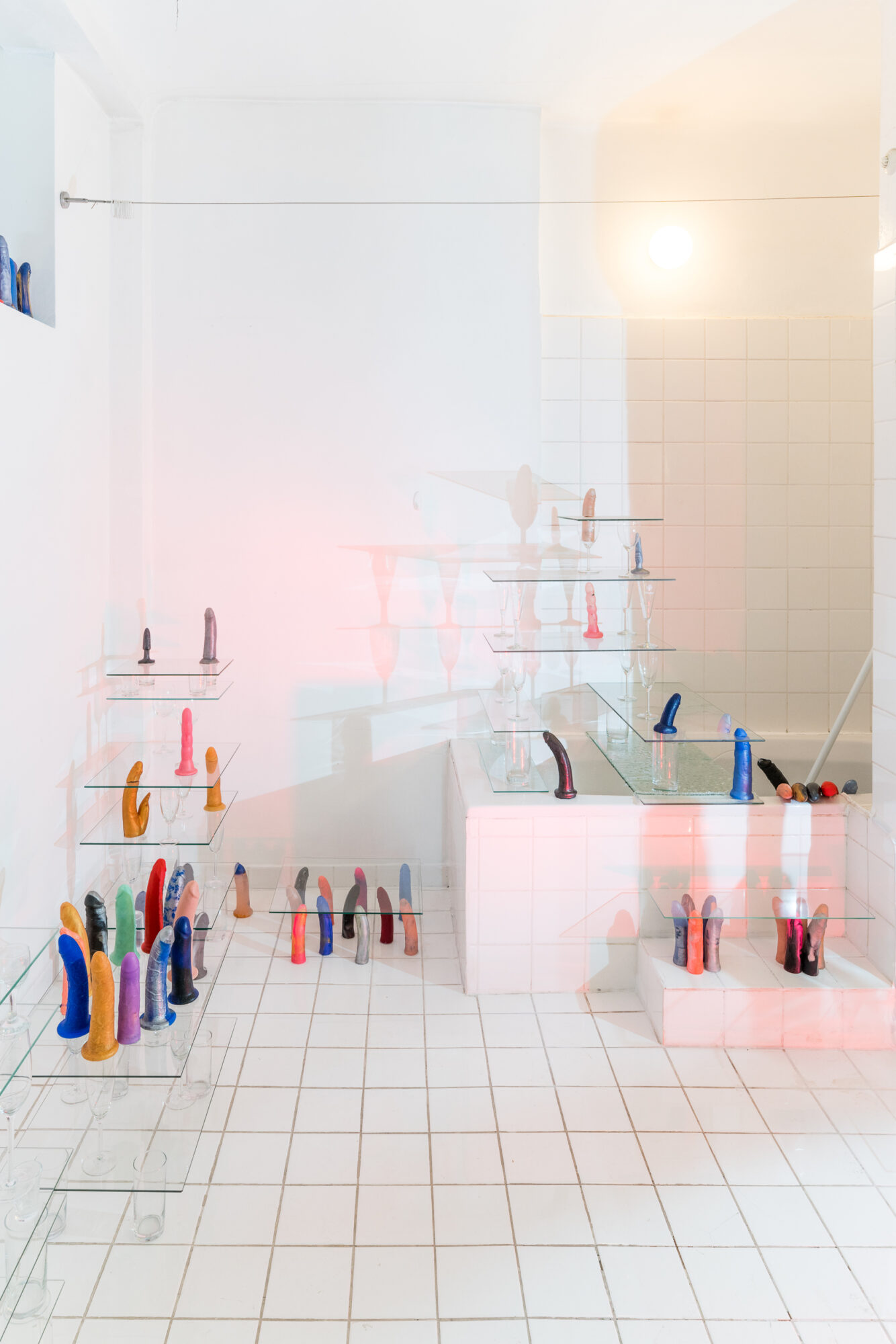 Xenia Lesniewski + Norman Hildebrandt I Got 5 On It, 2021, House of Losing Control/Vienna Art Week 2021

Apart from these rather intimate discussions of the loss of control, which focus on the subjective, another facet of the theme played a role in the House of Losing Control: loss of control as a pattern of interpretation for the crises that are currently shaping our lives. The spectrum of topics ranged from the difficult handling of traumatic pasts (Ramesh Daha, Isidora Krstic) to questions of cultural and political visibility (or making invisible: Jyoti Mistry) to what is probably the most urgent problem of our time – the climate and environmental crisis. Particularly haunting and touching in this context: the animated film “Fragile” by Danish artist Steffen Jorgenson. On paper, it reads like a bad joke: various animals – horse, pig, chicken and fly – perform Sting’s world hit “Fragile” together. Sounds quirky? It is – but without the message of the work (which, by the way, is perfectly crafted and produced with great attention to detail) ever tipping over into the ridiculous. On the contrary, the animals sing with a fervour that affects: “On and on the rain will say / how fragile we are, how fragile we are.” Viennese artist Christoph Weber also offered an interesting perspective on the fault lines between humans and nature with his installation “Not Yet Titled”: In a complicated experimental arrangement, Weber had a limestone collide with a concrete block. The result could be seen in the backyard of the House of Losing Control. It is not necessary to say which of the two materials – natural or manufactured – proved to be the more robust in this endurance test. In a trial of strength with nature, Weber reminds us, man is at a disadvantage in the long run.

In a trial of strength with nature, Weber reminds us, man is at a disadvantage in the long run. 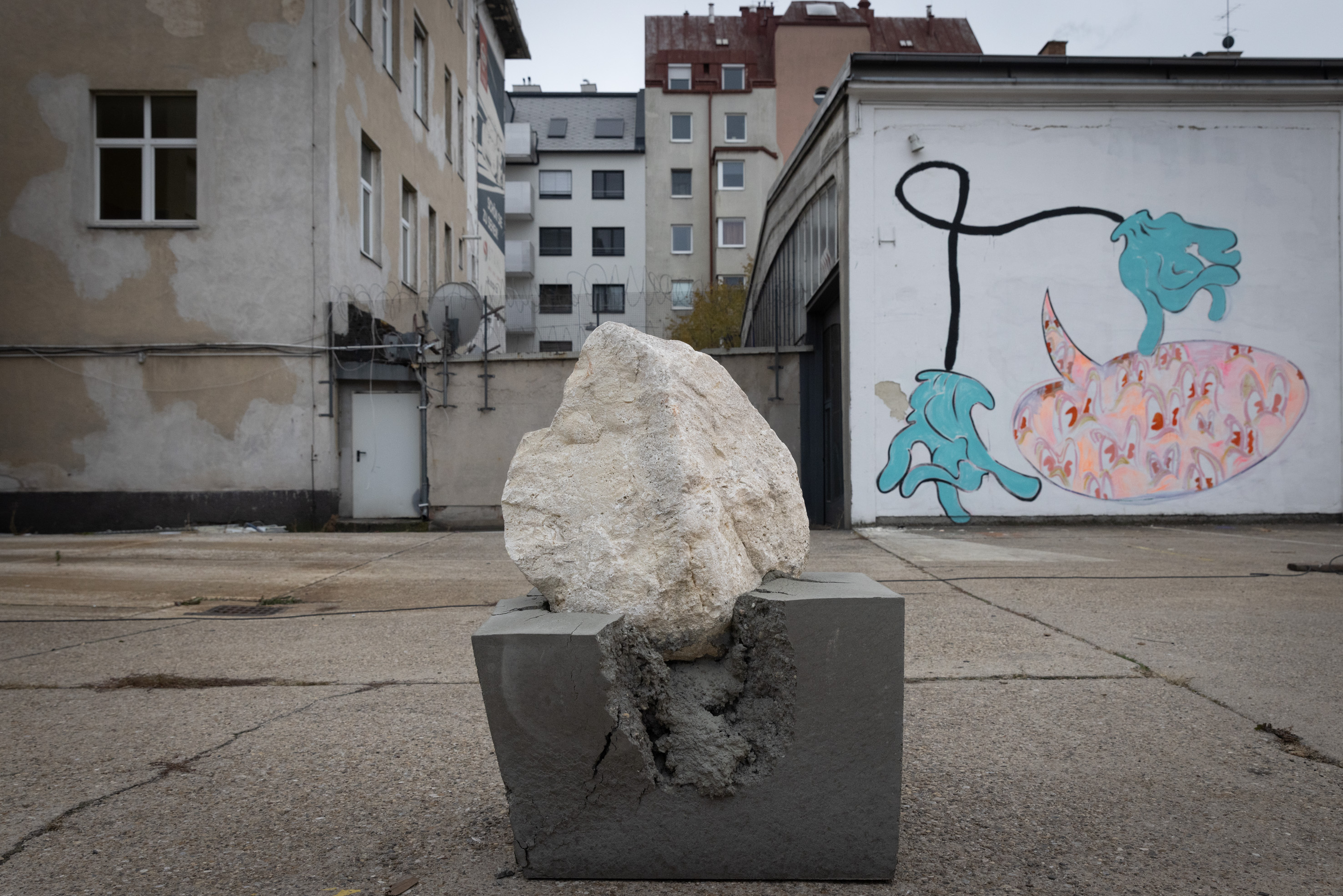 There are countless other works worth mentioning. This supplement can only shed some light on the show. It cannot reconstruct it. 80 artists were represented in the House of Losing Control – 80 attempts to find an answer to the question of what it means when control over our lives, our institutions, our economy and our environment slips away. The image left behind by this show is correspondingly polyphonic – and confusing. What was this exhibition? A warning sign? A utopia? A manifesto for letting go and letting fall? “People are nuts if they think they control their lives!” If it were possible to formulate something like a motto for the House of Losing Control in retrospect, it would probably be this beautiful sentence from one of Jenny Holzer’s works. A “truism”? Certainly. And a rather grim one at that; but also – a truth. Perhaps it is time to take it more to heart. 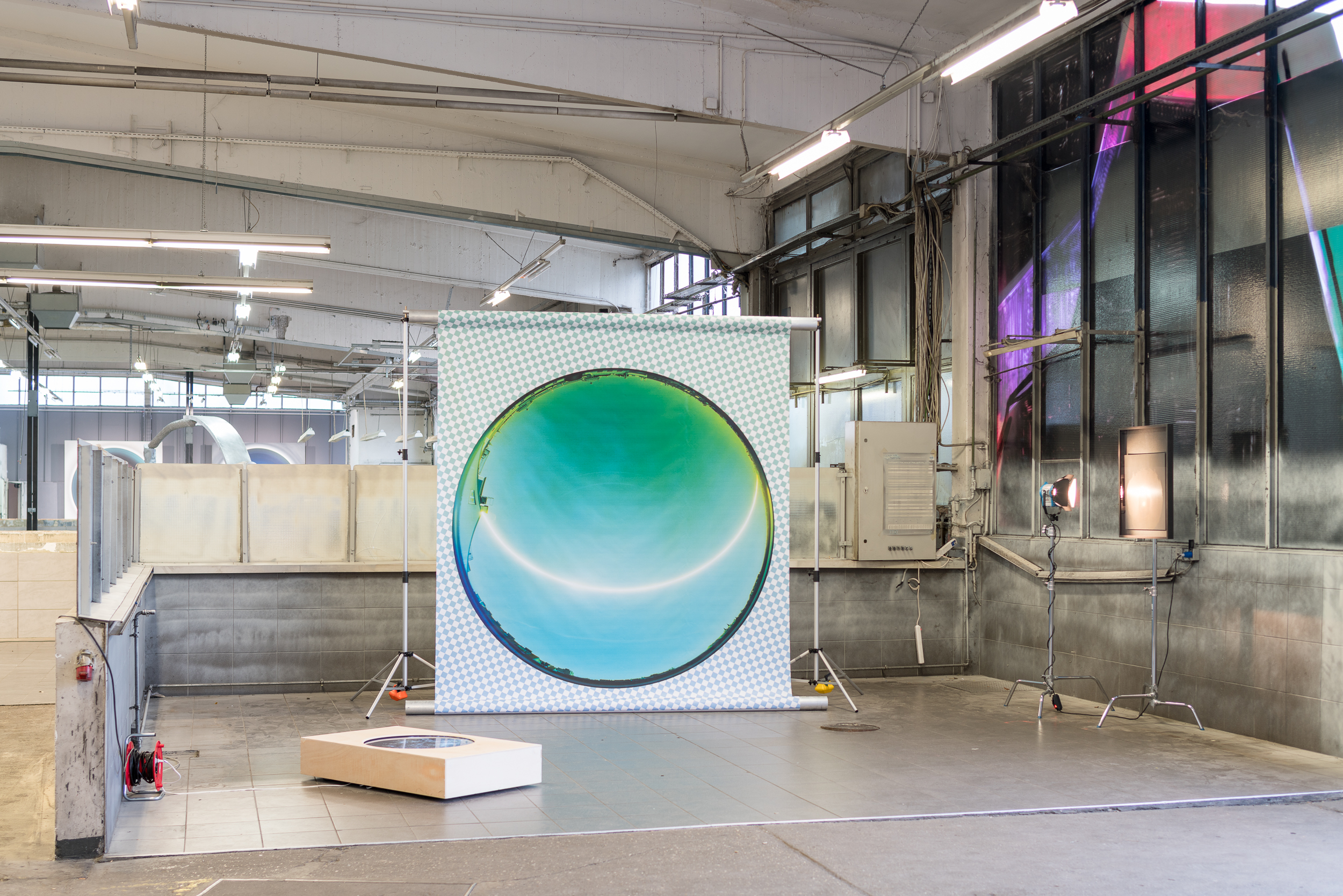 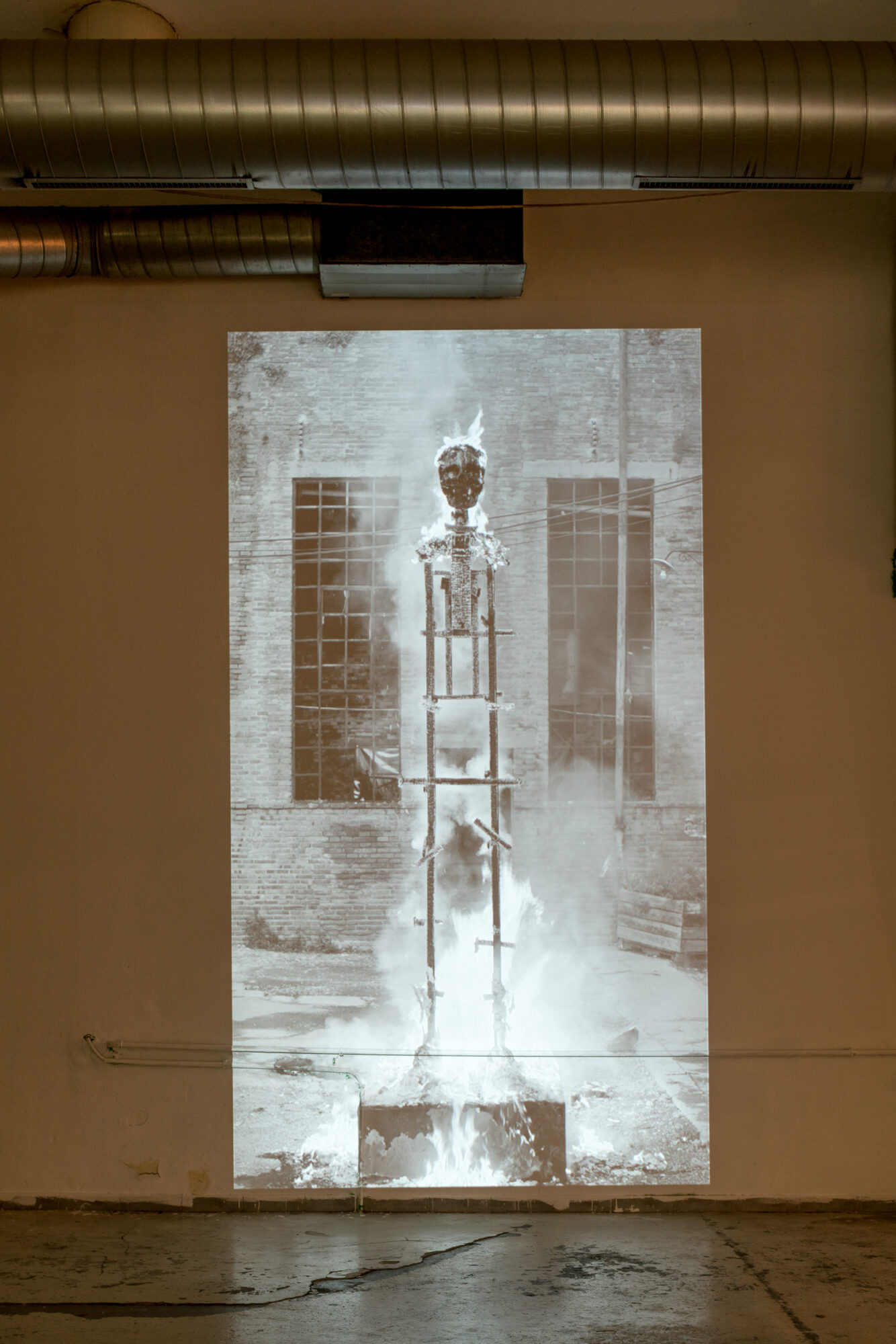 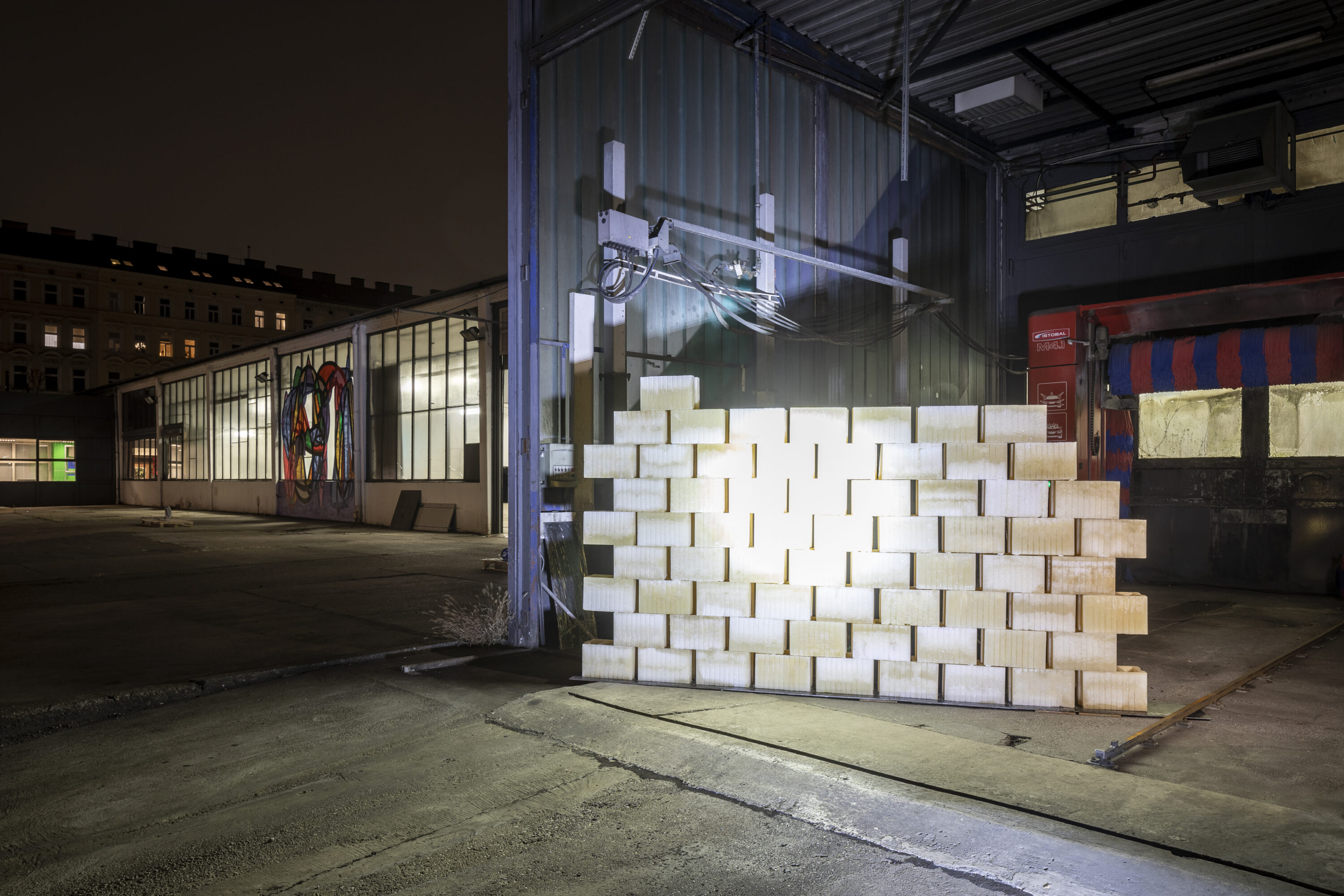 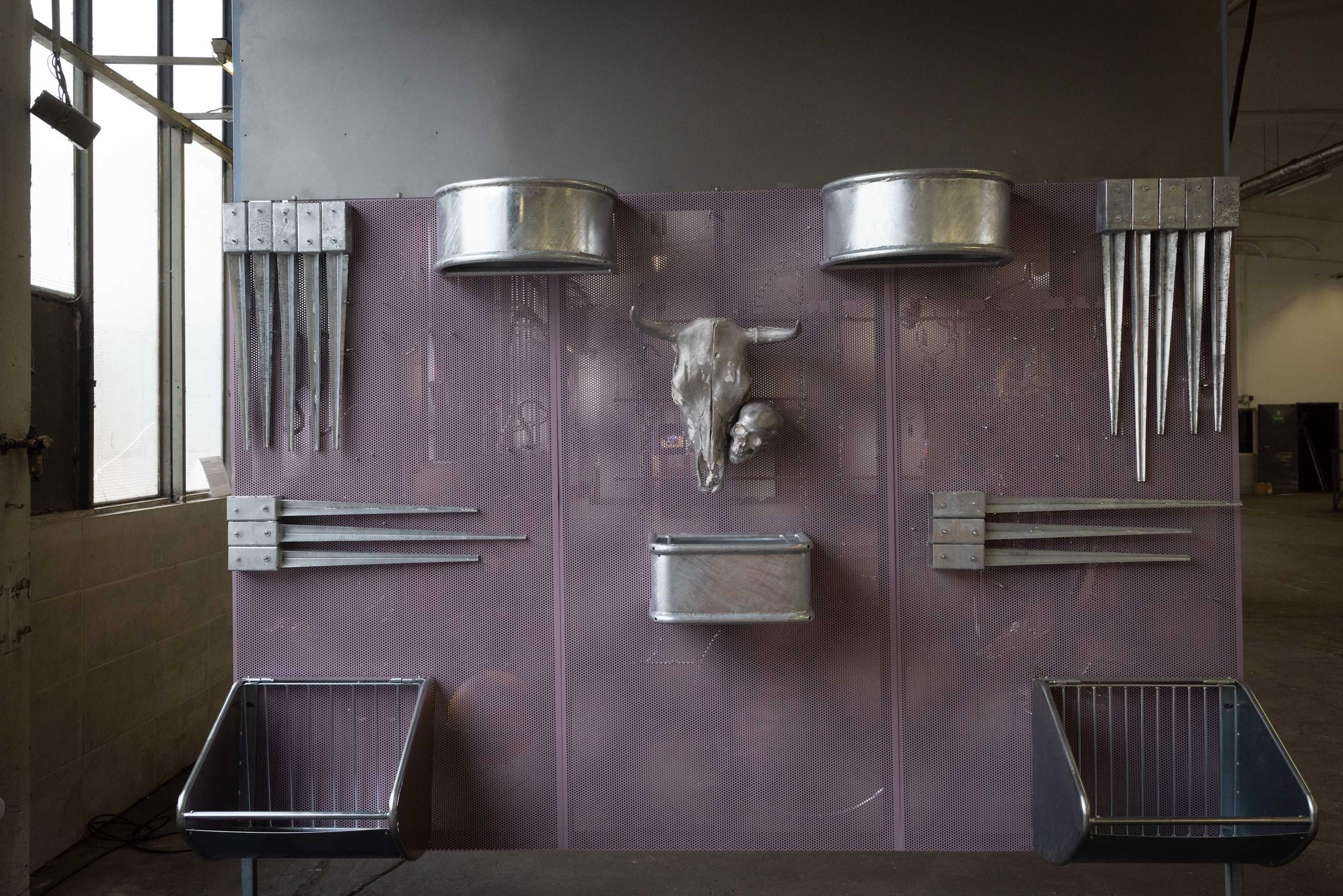 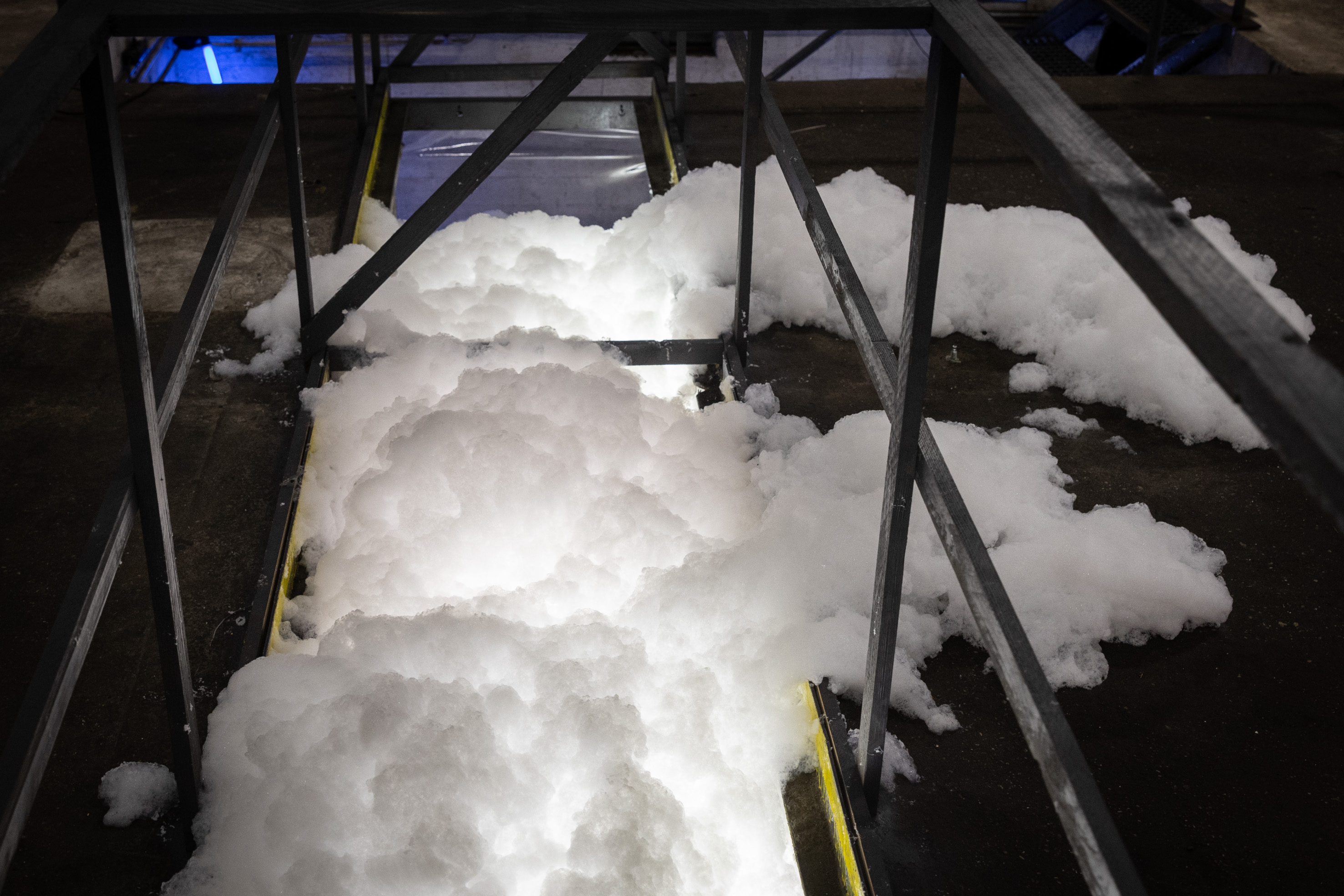 VIENNA ART WEEK 2021
Losing Control
Beset by crises. Out of control. Out of action. Awareness of humankind’s limited ability to intervene in the way of the world is increasing.
[contact-form-7 404 "Not Found"]