Beset by crises. Out of control. Out of action. Awareness of humankind’s limited ability to intervene in the way of the world is increasing. No less than two major horror scenarios have come to dominate current global events as we know them: first, the COVID-19 virus and its mutations; and second, the terrible natural disasters wrought by climate change. Storms, earthquakes and volcanic eruptions have shaken our hemisphere quite literally to its core. Even more palpable are the effects of the virus. A global pandemic has taken a dramatic toll our daily lives, wreaking havoc on long-standing systems – the economy, health, culture – while cutting our individual day-to-day activities to a minimum. Routines are thwarted by aimlessness, fueling isolation and putting social relationships to the test. Fear and insecurity are increasingly widespread. The “shrinking world” phenomenon ties us in place, travel is passé, and we can neither maintain nor expand our analog networks. Even stridently successful people are stumbling as the usual self-empowerment problem-solving strategies no longer work. We find ourselves in a collective stagger, reeling with vertigo. Vertigo – the dizzy state described by Alfred Hitchcock in his eponymous movie – is also the subject of much meticulous research by the artist duo Ruth Anderwald + Leonhard Grond. The two delve into Op Art in an investigation of perception and distorted images of reality. Psychological mirages and projections are threatening our grip on the real, our ability to stay grounded. Peter Sloterdijk once spoke of the disappearance of reality or the reality of disappearance. Culture is full of descriptions of whatever kind of vertigo, which illustrates utter powerlessness on the one hand and the pleasures of anarchic, boundary-smashing whirling on the other, and celebrates rapture with death-defying abandon.
One of the great misunderstandings in the history of civilization is the belief that human beings direct the ways of the world. The Copernican Revolution brought the shattering realization that the Earth is not the center of the solar system; its aftershocks can still be felt today. At least one thing is certain: human hubris leads to a fall. Daring videos by Bas Jan Ader demonstrate how failure can also become a constitutive moment in the creative process. The Dutch-born artist is known to have signed with the words “All is falling” from time to time. Ader never returned from his last mission in 1975 entitled “In Search of the Miraculous”, for which he set out to traverse the Atlantic in a small sailboat.

A helpful way to defuse the competition between culture and nature would be to rethink the dialectic of domination and servitude. In his œuvre, artist Lois Weinberger actively cultivated weeds and wild vegetation to show that nothing can tame the exuberance of nature. Land Art artists of the 1960s turned their backs on urban exhibition institutions and developed a new artistic approach to the landscape. Robert Smithson’s legendary “Spiral Jetty” (1970) in Utah impressively elucidated the transformative power of nature. In his work “On Orientation”, Almut Rink attempts to take up a non-anthropocentric perspective and – by means of urban gardening – actively engender a being-in-the-world that exists between autonomy and dependence. A counterpoint to the natural loss of control?

About a century ago, Sigmund Freud spoke of three historic humiliations to human beings: one cosmological, one biological and one psychological. So what, pray tell, are we to suffer now, says even the optimist with a maddened grin. Having arrived in the post-history of these great affronts, we feel our “thrownness” more radically and acutely than ever before. The arrogant, white, heterosexual male in Donald Trump’s terrifying vision has had his day. It turns out power is temporary after all. An emancipatory rearing-up of political correctness has made patriarchal behaviors a no-go. The loss of control is disintegrating hegemonic structures, which is both good and bad. What is antiquated is supposed to go, and innovation is supposed to come, but the current crisis shows that the wrong people are often affected. We have reached a collective turning point. We must all find a solution to the dilemma, in our own ways. Individuality remains in demand. Rarely has the future been so uncertain.

So what of “losing control” as a diagnosis of our time? How might we counter it? Would physical, psychological, artistic loosening exercises do the trick? Should we simply sing the praises of “letting go” – a knee-jerk reaction to years of behavioral self-empowerment and Just Do It? Artists have long practiced a boisterous, unrestrained kind of creative expression aimed at renewal, at an overcoming of ossified structures and aesthetic formulaicness. From Modernism to Abstract Expressionism and Informel to the Neue Wilde of the 1980s, artists have evoked liberation in gestures: just as Jackson Pollock’s “drip paintings” and Hermann Nitsch’s “Schüttbilder” (spill paintings) speak to a freedom of the body in its dealings with the traditional artistic medium, bodies of work by Martha Jungwirth, Herbert Brandl, and Hubert Scheibl also continue to exemplify gestural expression. Joining them is a younger generation of artists including Christian Eisenberger and Denise Rudolf Frank, who have likewise sought a kind of Dionysian abandon in expression. Artists love ecstasy, want to grow beyond themselves by entering trance-like states – like Henri Michaux, who made drawings and books under the influence of the hallucinogen mescaline. They are prone to obsessions. Psychedelic art of the 1960s was often based on drug experiments. Andy Warhol’s “Exploding Plastic Inevitable” (EPI, 1966) was conceived as a drug-fueled multimedia environment meant to stimulate and rush the senses, enabling a trip to other realms.
Art discovered the notion of chance as an essential part of the conscious relinquishing of control no later than Surrealist automatism. A number of artists have addressed the tension between power and powerlessness in their work. Among them is Markus Schinwald, who uses body prostheses to address dependency relationships and designs puppets that often point to invisible manipulation strategies happening on a larger scale. Another factor fueling the auctorial abandon of control (especially during the production process) was the postmodern discussion of the “death of the author” as described by Roland Barthes. Creation via non-creation. Action via non-action. Elimination of Schopenhauer’s dictum of “the world as will and idea”. Other challenges to the symbolic connotation of the sense of sight as an optical regulator and corrective include Crisfor’s analogue double exposures from the artist’s “Capprici” series and Arnulf Rainer’s “blind drawings”. The only thing left in this search for lost belief is faith – which has to make do without proof. Blindly we grope our way through the world. Breathe! 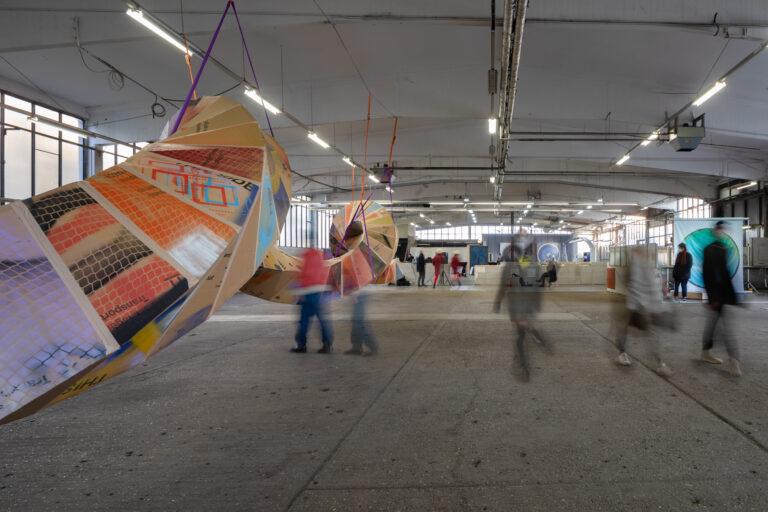