Barbis Ruder - A - a three-body problem 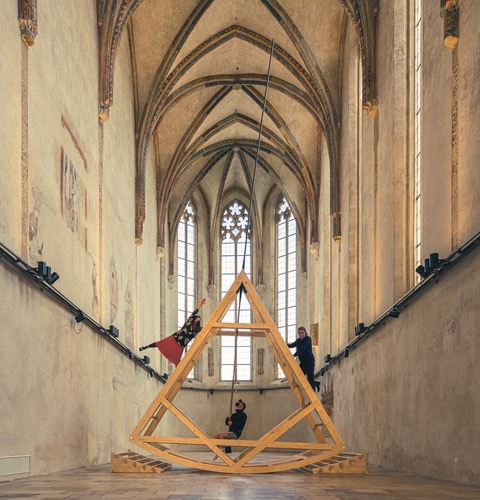 A is a triangle and a three-part work made of an instrument, inscription and sound.
It is inspired by the Gothic architecture of the Dominican Church in Krems and is now vibrating again in the atrium of the University of Applied Arts as part of Vienna Art Week.
There are infinite variables in bringing three bodies into harmony. In weightless space, such a balance is only possible if three planets of exactly the same size are made to travel over an infinity loop. But on earth this is not possible.
Accordingly, the work tries to agree on the concert pitch A, using the means of the note:

A is the pitch on which the orchestra agrees. A clean A promises unison - a common ground that is "handed over" and attuned by the piano to the strings and then the winds. It is a common reference point. Before it starts, everyone swings into tune. The standard concert pitch or standard tuning pitch valid in many countries since an international conference in London in 1939 is fixed at a1 = 440 Hertz In German and Austrian symphony orchestras a1 = 443 Hz is common, in Switzerland a1 = 442 Hz.

- The kinetic sculpture A is an instrument that consists of a triangle of truss. The bottom is rounded to a seesaw and in its top holds a long pendulum, which reaches long into the sky. It is an instrument for body, soul and spirit, is played by three people at the same time. They set the beat. In the composition it swings like a metronome in and against each other. It stays exciting whether there is a tipping point or the construction remains in balance.

- The chorus "A" locates the note A as a sung chorus in a video work in space. Taken over by the tuning fork, the voice exponentiates itself in space and sound. The performance in the video

- The A - as a photographic inscription of the body in space becomes a multiple exposure in the architecture of the Dominican Church Krems.

In addition to this three-part work, an AR (augmented reality) exhibition/installation will be on view.

The University of Applied Arts Vienna is committed to promoting an open society, fostering intellectual and creative freedom, and ensuring critical and empathic discourse. Working with faculty and researchers, students and graduates, staff and partners, the school develops artistic and radical solutions for designing and coping with technological, media and social change.