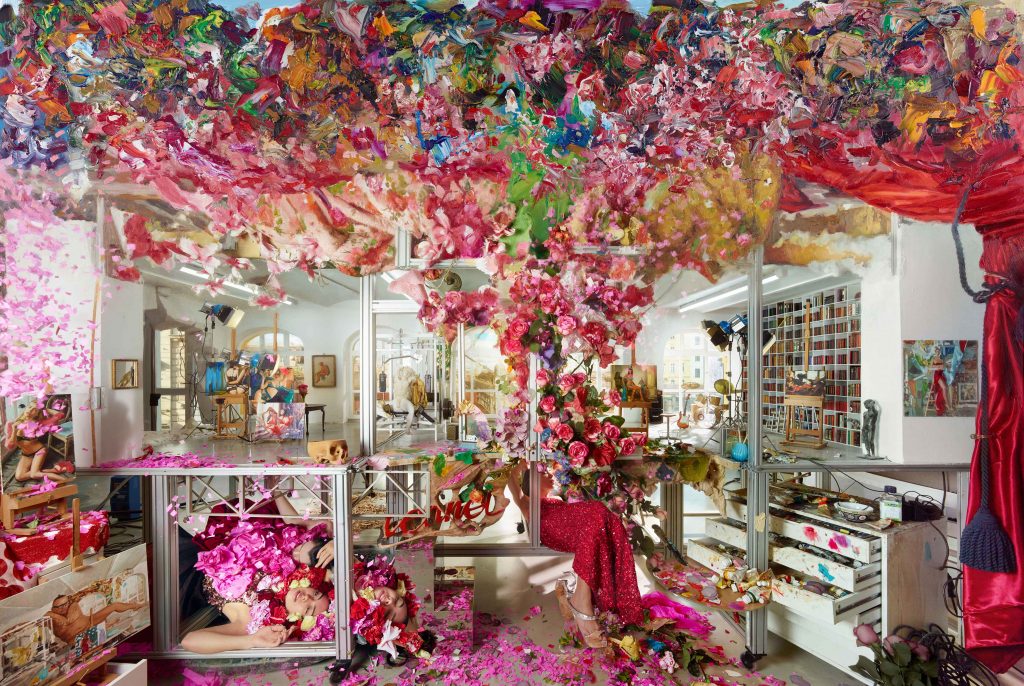 “What […] is truth? Worn-out metaphors which have become powerless to affect the senses; coins which have their obverse effaced and now are no longer of account as coins but merely as metal.”

These days “making something so,” or speaking the truth, is no longer the exclusive preserve of such classical truthtellers as the clergy, philosophers, scientists and (one would hope) politicians and heads of state, but also of those who have found other, unique and more nuanced ways of expressing the truth: artists. Whether explicitly created in service of truth-finding or not, the development and expression of a formal visual vocabulary could demonstrate the essentialist character of art and its claim to meaning – perhaps even in the archaic, philosophical sense. Paintings by Beatrice Dreux, which clearly distance themselves from day-to-day political and illustrative tendencies, shine a spotlight on art’s abstract, timeless value and true potential. They point to the possibility of an aesthetic remedy to a fast-moving, consumer-oriented everyday that is increasingly driven by business interests.

Truth-seeking art tends to find itself in competition with scholarship, or to represent an epistemological undertaking (e.g. in the case of art-and-science projects). Works by collaborative duo Gerald Nestler and Sylvia Eckermann or Martin Walde draw on research and science-based visualization methods, playfully appropriating the factual knowledge of a world dedicated to reason in word and image, a world that may have to learn to think in terms of certainties rather than truths. While the former concept is open to visionary projects, the latter seeks to pin down and determine a dynamic reality. Tomas Eller’s photo-engraving series “Trope” shows images of moons, asteroids, and craters and uses scientific methods to address the basic constants of our lives (space, time, matter and energy) and ask existential questions: Where do we come from? Who are we? Where are we going?

The idea of a single and universal truth, a master narrative, seemed more and more dubious as modernity took its course; the notion of objectivity crumbled as the concept of subjective truth took hold. The fact that truth itself is also a construct and an act of appropriation comes through in works by artists Ashley Hans Scheirl and Jakob Lena Knebl, for example. Their multimedia creations level the boundary between art and life, allow different media, materialities and disciplines to collide, and open their biological gender to debate. In this case, the postulate of individual, creative sovereignty also helps salvage an idiosyncratic concept of truth, as identity itself is part of a constructivist world view. Bernhard Cella’s project “Butch Heroes – Figures of Queerness, Reconquered for History” by Ria Brodell, finds the heroic in the forgotten: Brodell researched individual lives on the basis of historical reports, maps, journals, paintings, drawings and photographs for each of her 28 portraits of extraordinary people.

It is probably no coincidence that “making” sounds so similar to “faking,” and that truth and untruth tend to blend in the whirl of the not-yet-true. A number of artists including Lisl Ponger, whose work deals with nationalism and postcolonial theory, have explored individuals’ (or even individual nations’) truth-frenzied fantasies of what is possible – notions that can all too easily become pathological aberrations of ideological ideas and lead to boundless abuse of power. At a time when fake news is booming, politicians lie openly about things we see with our own eyes, and news is weaponized, many people yearn for a – preferably sole – objective authority that speaks the truth. Art activist groups such as the Center for Political Beauty (Berlin) and Forensic Architecture (London), both of which will attend the Vienna Art Week line-up on 22 November, draw attention to these dangerous social developments. Their projects radically pillory right-wing populism and the violation of human rights around the world. Anna Jermolaewa, who considers herself a realist “no matter what and in which medium,” but also John and Joy Gerrard, deal with current and historical conditions of society. John Gerrard’s constructed moving images address ecological issues such as water and air pollution, while his sister Joy Gerrard captures demonstrating populations’ reactions to such tenuous global political developments as Brexit in ink drawings that are as sensual as they are political. The work of these artists joins a long line of critical artistic voices and a tradition that can also be traced back to Michel Foucault’s lectures on the concept of “parrhesia,” which he gave as a reaction to the late-1960s Free Speech Movement at the University of California at Berkeley. It culminated in the question as to who had the right, duty and courage to tell the truth.

Karin Ferrari’s ambitious project “Decoding the Whole Truth” uses affirmation to pry the truth from the corset of concealment and disguise. Her experimental documentary fictions question the staging strategies of media and consumer culture between fake news, conspiracy theory and commodity fetishism. And Lois Renner notes: “To find a truth, I create an untruth, because art is the lie that tells the truth.” Art is also always an interpretation of the world that deviates from one-dimensional factual reports and a shortened representation of reality. Claudia Märzendorfer’s works portray the ephemeral, they melt and disappear, and recount what the world does to her. To explore alternative belief systems, Klaus Pichler infiltrated esoteric circles for two years. His photographic series “This will change your life forever” investigates supposedly true promises of salvation and draws attention to the dangers associated with this kind of hollow, para-religious compensation. Distance healing, aura sprays and unicorn essences air one thing above all: a mixture of gullibility, nonsense and deceit.

A city transformed into an exhibition: All of Vienna is art!

Vienna Art Week’s MAKING TRUTH exhibition circuit merges the temporal and spatial framing of the art platform with the city’s artistic resources. It is an exhibition with changed parameters: new spaces, new formats for art. Vienna Art Week aims to use Open Studio Days to open up, expand and broaden the art establishment’s existing institutional, scholarly and commercial network with a look at artists’ studios. One key aspect of this project is its direct access to art and artists. The production sites provide not only glimpses behind the scenes, they also serve as places of representation with all their possibilities and impossibilities. The work of artist Lois Renner has exemplified this notion for decades with a blend of photography and painting. Vienna Art Week also sees itself as an art alliance in the spirit of Lisl Ponger, who once said that making truth was not an endpoint, but a dialectical process between multiple voices.

The highlight of the Vienna Art Week is the MAKING TRUTH Exhbition Parcours: 14 selected studios have developed exhibitions on this year’s motto and will keep their studios open on 16 and 17 November.